Alarm System and Window Replacements: Everything You Need to Know

If you are having a window replacement job done on your home and have a home security or alarm system in place, it's important to keep the alarm system intact. Here are a few things to keep in mind for a smooth installation.

Most window manufacturers recommend that clients’ alarm companies re-install the alarms on a replacement window after the project is complete. Only the alarm technicians are licensed and experienced in reconnecting alarms to new windows, so it is highly recommened. After all, you wouldn’t want an alarm technician installing your windows, so why would you want a window installer reconnecting your alarms?  Major legal issues can arise with someone who isn’t experienced in installing new alarm systems.  For example, if the window company installs the alarms improperly, then they might end up in a lawsuit if there is a break-in.  By having an alarm expert install and test the alarm system that goes with your window replacement, the liability remains with them.

Issues can arise between alarm systems and a change in window style. For example, if you change from a single hung window (where only the lower sash operates up and down) to a double hung window (where both the top and bottom sashes operate), you’d need to modify the alarm system to include extra wire and a tag on the top sash because the original system’s wires only connect to the bottom sash.  Or if you change from a double hung to a casement window, which has a totally different mode of operation, you would have to upgrade to a completely different alarm system for that window. 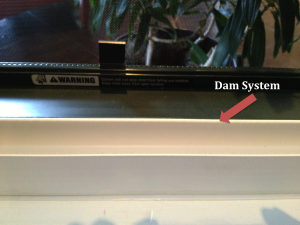 Additionally, our window manufacturer does not allow us to drill holes through the frame of the window as is required for installing flush mount alarms, due to the possibility of moisture penetration into the wall. Our solution to that issue is generally just to lead the wires to the inside the window (instead of the outside) and allow the alarm company to connect the windows with a surface mount alarm on the face of the frame itself. Getting a window replacement can be a great opportunity to install a new, upgraded type of security system that avoids a lot of these wiring issues. Some alternative alarms that protect the home from intruders include the following: 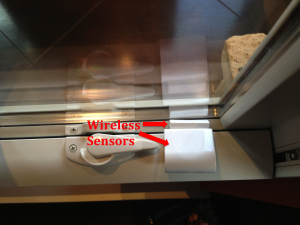 Something very important to be aware of when it comes to home security is that most break-ins occur through doors, so the doors should be first priority for alarms in the home. When it comes to window security, talk with your alarm company to determine the most effective solution for your home. If you need a referral for a trustworthy alarm company, we would be happy to give one to you. Just call our office at 210-222-BEST (2378) and ask to speak with one of our Best by Southwest client services agents. Any further questions about window alarm systems and window replacement? Feel free to contact us directly or post a question below.