Replacement Windows vs New Construction Windows: Which is Better for My Home? I have been asked this question numerous times:  “Why can’t I just buy new construction windows, which cost less than custom-sized windows, to replace my old, existing windows?”

There is a definite difference between new construction (standard-size) and replacement (custom-size) windows.  Even if you find what appears to be the exact same size window, a new construction window isn’t built to simply “plug in” to the opening where an existing window has been removed.

The Downside and Problems with New Construction Windows

At first glance it may seem like you could just pound out your own window, pick a new cookie-cutter window up off the shelf at a big box store, and slide it right into the existing window opening.  After all, most production homes built after 1970 were likely candidates for standard-size new construction windows.  These post-1970 production homes are usually built with aluminum-framed windows that are in standard sizes like “3050” or “3060,” which describes the size in feet, width first, then height (so, a 3050 would be 3’ x 5’). However, there are a few major downsides to trying to make a standard-size work in a standard-size opening. 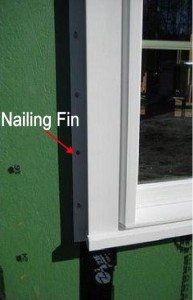 Most standard-size new construction windows have a nail fin around the exterior frame.  A nail (or nailing) fin is a thin piece of metal extending from the window itself that goes all the way around the perimeter of the window frame.

This piece adds to the window’s permanence and is nailed directly to the house’s frame (studs), hidden between the interior and exterior of your home. With a new construction home, the window is put in before the rest of the wall is finished around it. However, to properly install this type of window to a finished home, you would first need to expose the studs.

This will require you to remove all existing exterior trim and cut back the existing siding. It’s a labor-intensive and rather destructive process, and nearly impossible to do with brick or stone. I mean, do you really want to remove the brick or stone to get to the stud?  Of course not.

After adding up the cost of the standard-size window, new trim, extensive labor cost, and repainting, your project can become much more expensive than even custom-built replacement windows, especially when you have a brick or stone dilemma, where exposing the studs is nearly impossible.

Now you can see the advantage of custom-size windows that are designed for replacing existing windows.  No nail fin means they can literally just slide into the hole and be secured to the wall with very discreet screws in the frame. They are made to be installed without the fuss of disturbing the trim and siding and are not a problem for brick or rock homes.

Not only is there little to no damage at all to your wall, the installation time is much shorter, meaning less inconvenience for you. To see how old windows are removed and replacement windows are installed, read this blog post or watch this video.

In most cases, custom replacement windows are also a higher quality window than standard sized windows. Since they are an upgrade, the energy efficiency and lower electric bills will also help offset the cost difference you will pay for custom-sized replacement windows.

For a remodeling project of this magnitude, it is always wiser not to try and cut corners. Choosing the product that was designed specifically for replacement means that you will save yourself a lot of time, hassle, and probably money in the long run. If you have any further questions about new construction windows versus replacement windows and what’s best for your situation, we’d be happy to help you any way we can. Feel free to contact us directly.